How can European countries become leaders of innovation? Two experts discuss the continent’s weaknesses and possibilities.

When it comes to innovation, Europe’s performance is far behind that of the US. Not only does it not have enterprises like Google, Facebook or Amazon; it also has fewer unicorns (a startup valued at over $ 1 billion). While the US counts 105, the European countries only count 32 in total. But awareness is rising. In June, the European Commissioner for Research and Innovation, Carlos Moedas, stated: “Europe is strong in science but underperforming on innovation.”

To identify and scale-up innovation and to support entrepreneurs, the European Commission has, among other measures, created an Innovation Council with a budget of € 2.7 billion for the period 2018 to 2020. What are other opportunities for innovation made in Europe? Marianne Thellersen, Senior Vice President on Innovation and Entrepreneurship at the Technical University of Denmark, and Phil Budden, senior lecturer at MIT’s Management School, are discussing the reasons for Europe’s lack of innovation impact and also strategies to strengthen its position.

Technologist: Why is Europe underperforming in innovation, compared for example to the US?

Marianne Thellersen: Looking at the capacity index based on the MIT approach, we have excellent research in Europe and very good quality scientific publications. Where we have gaps is in the general approach in towards entrepreneurial risks. In the US, inventions related to societal challenges count as much as good fundamental research. In Europe we mainly evaluate quality in citations and not impact in society. University research can for example create impact by bringing the in-sights generated to existing or new companies.

Phil Budden: In the MIT study mentioned by Marianne, we separate out the innovation capacity on one side from the entrepreneurship capacity on the other. While the first one looks at how basic research and science produce solutions that could be translated into useful products, the latter is concerned with the growth and the development of enterprises – a likely vehicle for such translation – in a specific place, such as a city or a region. To support ‘innovation ecosystems’, one has to connect both capacities. This is where Europe should make more progress. The fundamentals are there: a high level of research and very developed industrial infrastructures.  But better connectivity would help European states.

T. These are problems that have been known for a long time. What has been done so far to resolve them?

MT. First of all, it is very difficult to change cultural habits, especially for startups, as hundreds of clusters have been created all over Europe, where entrepreneurs can build capacities and bring their ideas to life. At the same time, many countries have launched programs to ease the access to venture capital, for example in Denmark and in France. Recently, the German government has proposed to create a federal agency to support disruptive innovations.

PB. For Europe, it is an advantage that innovation has been a priority for governments all over the world over the last years. It can look at different ecosystems like Boston, Silicon Valley or Israel to learn about best practices. Some regions in Europe have made considerable progress. In Spain for instance, the government has created programs to tighten the link between universities and companies. In Sweden and Denmark, entrepreneurial skills are taught very early, even in primary schools.

T. Startups in the US have an advantage: while their European counterparts face a market that is multilingual, they have direct access to a huge domestic market. How could this handicap be compensated?

MT. There is no easy fix to that, especially with the language barrier. Public procurement policies have several times been discussed as possible levers – maybe it is time to go from talking to expectations.

PB. The internal market size is a factor, but I don’t think that this is the main handicap for entrepreneurs in Europe. Those in Israel, for example, have to cope with a small domestic market, and also cope with linguistic differences. Instead, in my opinion, the most important challenge is the wide variation in relevant market regulations among the different European markets. Given the downsides of negotiated harmonisation, Governments should get away from pursuing detailed rules. Even in the US, we see that startups that expand their sales to other US states can struggle with different regimes. Given the pace of innovation, it is better to adapt to new situations by producing more flexible guidelines.

T. One of the main instruments of the European Commission to support innovation is the European Innovation Council (EIC). What can be the role of this council?

MT. The EIC enters into an enhanced pilot phase in 2019. The idea is to have an instrument for excellence similar to the European Research Council (ERC), that has funded basic research since 2007 and that has led to many scientific breakthroughs. With the EIC, Europe sends a signal to its students and researchers that excellence can be achieved through different ways, through basic research as well as through innovation.

T. How important are government initiatives to create and to support innovation, given the speed at which innovation is advancing?

PB. Governments have a role to play in sustaining innovation and entrepreneurship. Building dynamic ‘innovation ecosystems’ without governmental support is difficult. Take the iconic Silicon Valley: at the beginning of the 20th century, the region had been a major site of US Navy research and technology. At that time, the Navy conducted research into radio that led to the creation of many local firms, which was supported by Stanford University.  Those Government investments contributed, as did later public procurement of technology products, among other factors like the presence of Stanford University, to the development of a very innovative cluster.

MT. One mustn’t forget that the foundations of today’s technological advances, which seem to happen very quickly, lie in processes that took decades. If you have a look at the iPhone, it combines many technologies like a touchscreen or a GPS, which developed very independently in years of fundamental research. Once this step has been made, new applications appear quite easily. Who knows what will be the applications of the findings that are made at CERN with the Higgs boson in 30 years? I am convinced that public support accelerates technical progress. One instrument can be governmental procurement: it could serve as a pathway for innovators and ease the access to venture capital. In Denmark, we have seen that this strategy has led to the development of a strong hearing aid industry.

T. What is the role of universities in the process of innovation? How has it changed over the past years?

MT. The role of universities has changed a lot: Once universities mainly generated knowledge which was transmitted through collaboration with companies and capability building in education. Now universities are also seen as job creators. For example, the Technical University of Denmark has created a very dynamic ecosystem over the past years with an average of about 60 start-up creations per year – 50 of them being created by enrolled students. The goal from the university is to enhance the possibility of starting a successful company. We do that by developing the ecosystem around the students and the researchers. In that way, we try to give the students and the researchers the curiosity to be entrepreneurially minded. That said, it is up to the individuals if they want to do a startup themselves or go for the intrapreneurship way instead.

PB. I believe that today’s universities can play a major role in economic development, beyond their traditional roles of research and education. To support local prosperity, they can bring together the innovation and entrepreneurship capacities, offer space to their students for entrepreneurial experiences and create a dialogue with venture capitalists, governments and Corporate stakeholders. However, many universities, especially much older ones founded for ‘theological’ (rather than ‘technological’) purposes, still struggle with this new task.

T. Europe hasn’t developed its Google, Amazon or Uber. What could be some of the fields to create future European giants?

PB. It is true that Europe hasn’t benefited as much from the early waves of the digital revolution as the US did. However, in my opinion, the future of technological innovation is now more open. That gives many regions of the world the chance to compete in emerging fields, if they can harness insights from leading ‘innovation ecosystems’, especially that science and research need to be combined with the entrepreneurship capacity for greater impact.  In this fourth wave of the industrial revolution (4IR), Europe could play a significant role in applications flowing from say the field of artificial intelligence (AI), notwithstanding the growing competition from China and other markets.

MT.  Europe has developed Skype and Spotify – and the next major success can happen in many fields with scalable potential. 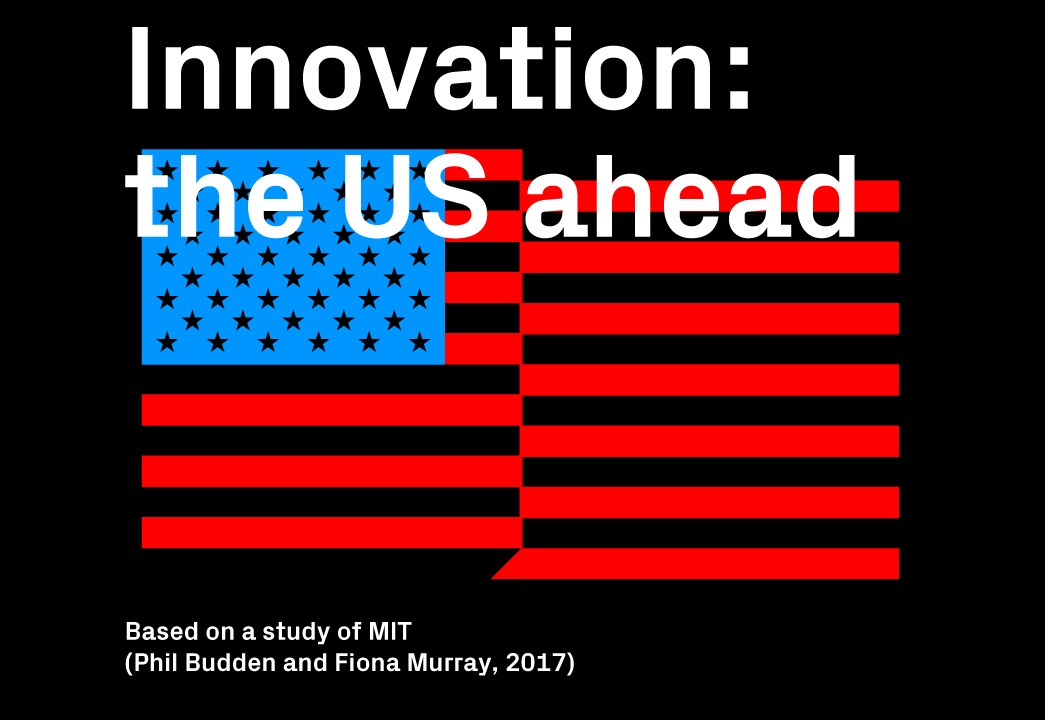 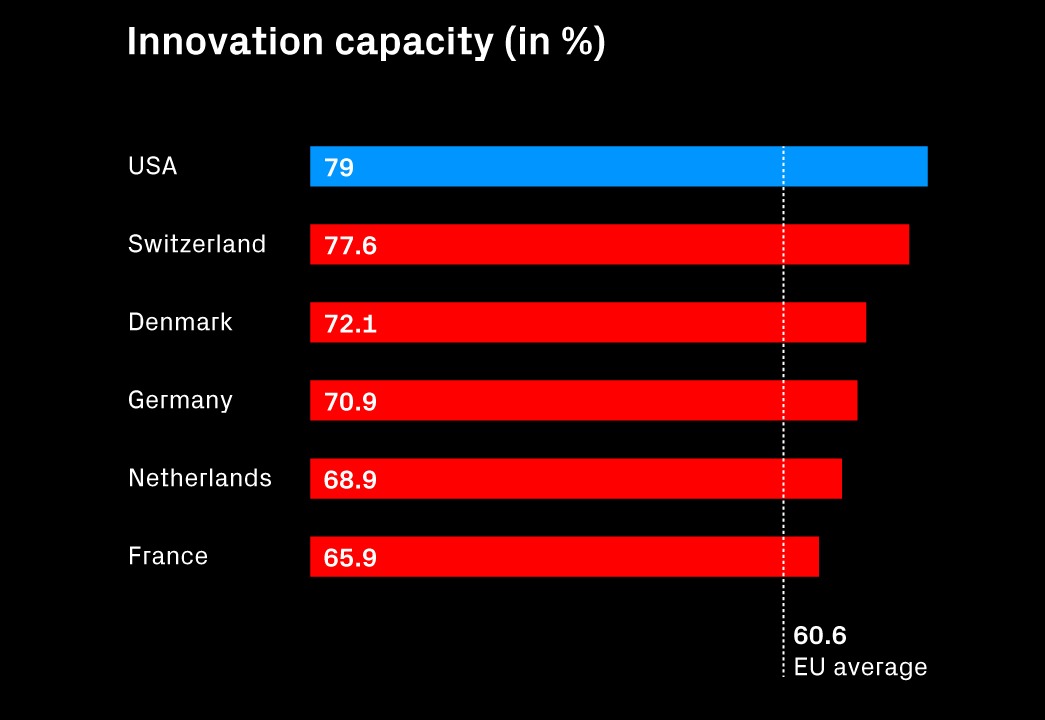 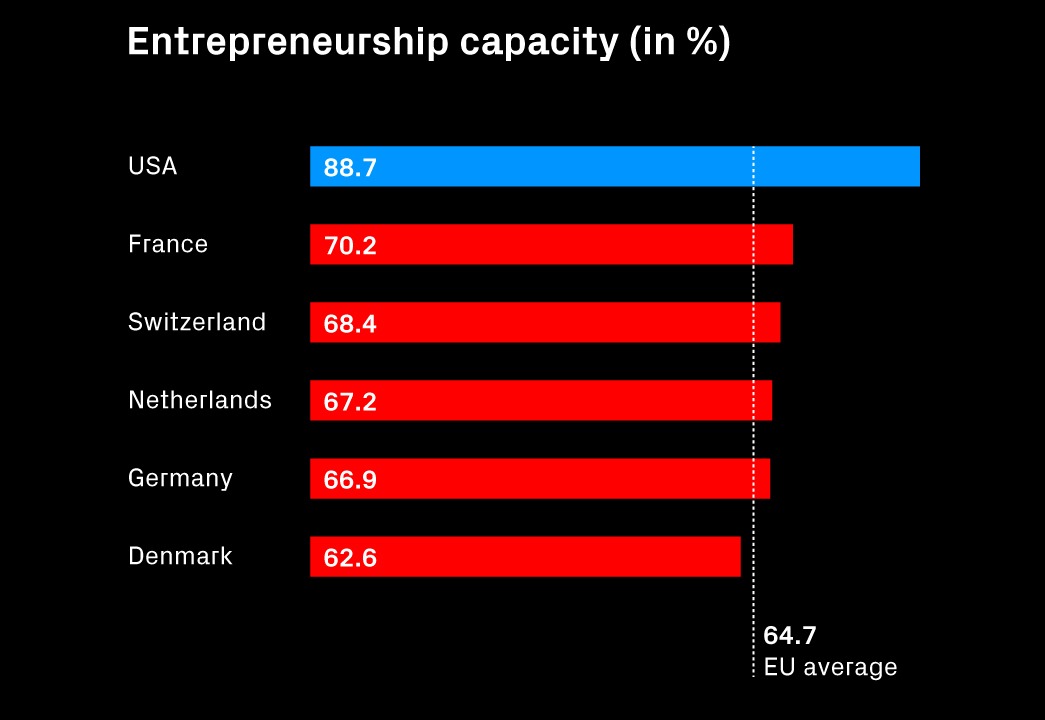 The European Central Bank is offering a payment system to compete with digital services and credit card companies. European start-ups could benefit from it.

Artisense develops a 3D-vision technology for autonomous cars and robots to navigate effectively.