From fintech to health to the environment, clever inventions are improving the lives of millions of people.

African tech start-ups received more than $560 million of investment in 2017, a new record, while in 2018 the number of internet users increased by more than 20%. The liberation of talent is also a key factor. Says Anne-Françoise Yao, who heads the École Polytechnique’s pioneering, multi-partner Data Sciences programme in Ivory Coast: “Previously, if you were a mathematician you could become a teacher. But not everyone can or wants to be a teacher. Now if you love maths you can do a hundred things.” The examples below provide some of the flavour of what is happening in Africa’s thriving start-up scene.

In 2015 The Economist was already asking, “Why does Kenya lead the world in mobile money?” The magazine was impressed with M-Pesa, a phone-based money transfer system launched in 2007 as a way to manage microloans. Now it is used for all sorts of transactions – and is spreading not only through Africa but also to eastern Europe, Afghanistan, India and beyond.

By its 10th anniversary M-Pesa processed 6 billion transactions for 30 million users worldwide. As Bill Gates wrote on Twitter: “Kenya’s M-Pesa proves that when people are empowered, they will use digital tech to innovate on their own behalf”.

Between 1995 and 2016 Africa’s population grew by an average of 2.7% annually, more than twice the global rate This makes food security imperative. Kenyan start-up iCow, launched in 2011, is one of the simplest but cleverest tools being used to optimise every aspect of farming. Registered farmers are sent useful data and advice on best practice, and can see measurable improvements to yields in as little as three months.

Many users only have basic phones, so iCow communicates via SMS messages. iCow is having a demonstrable impact on farming in East Africa, with an estimated 50,000 to 60,000 users, 70 to 80% of them in Kenya, with the remainder in Ethiopia and Tanzania. 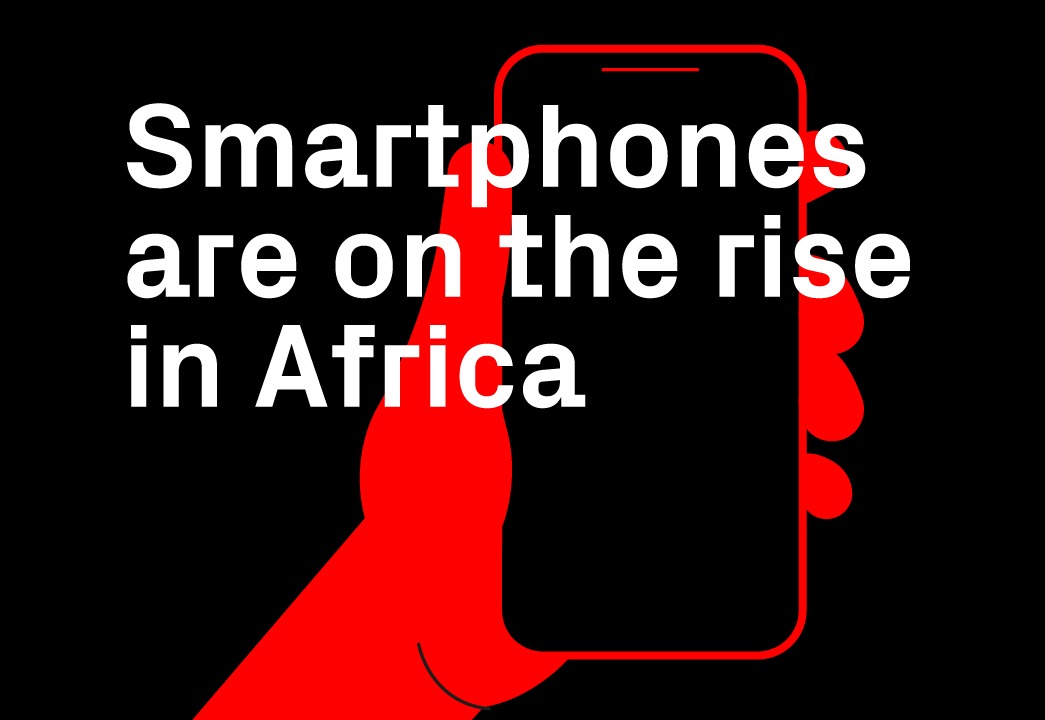 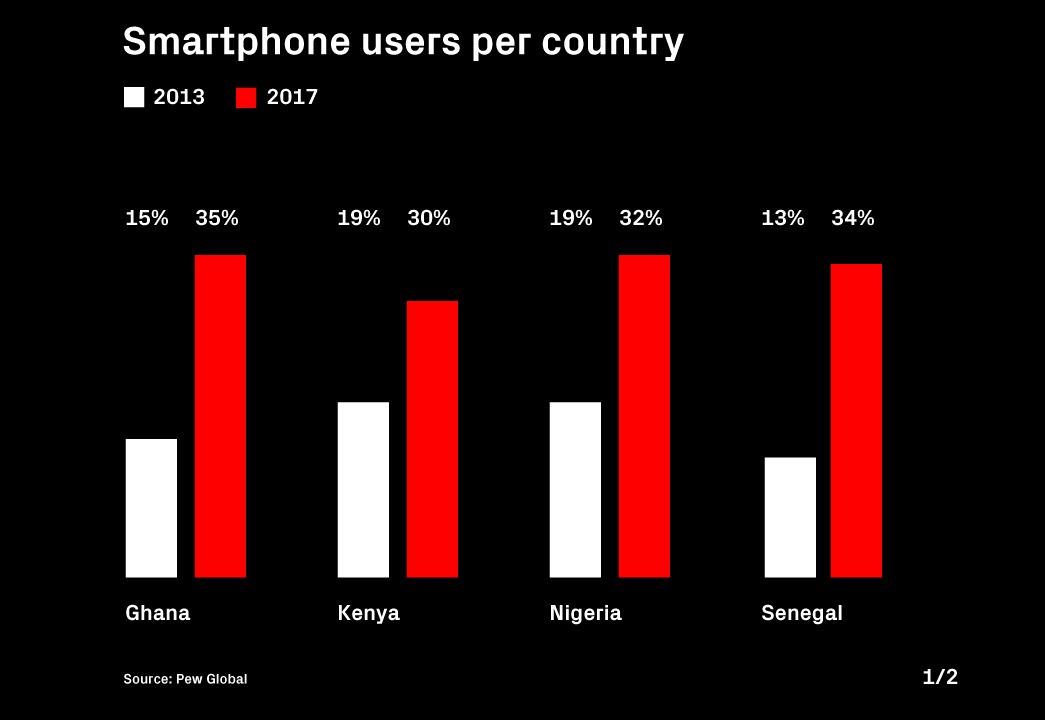 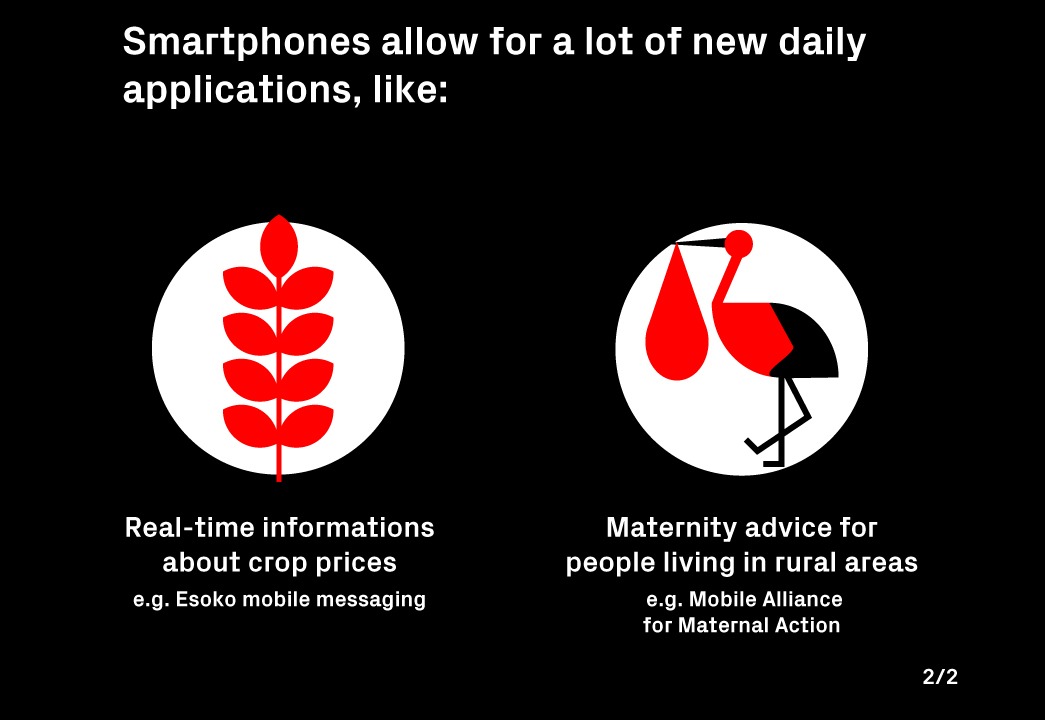 Fake drugs are a deadly and longstanding problem in Africa. One way to address it is through the high level of mobile-phone ownership in Africa (as high as 80% in some West African countries). Users simply text a code on medicine containers to a free number to confirm authenticity.

This approach was pioneered in 2009 by Ashifi Gogo, a Ghanaian student and founder of Sproxil, one of the main providers of authentication services in Africa. Employed initially in West Africa, Sproxil’s products are now used in five countries across three continents. Sproxil won the 2010 IBM SmartCamp Boston Award and the 2009 Clinton Global Initiative Outstanding Commitment Award, while Gogo himself won the Social Entrepreneur of the Year award from the Schwab Foundation in 2014.

The “safe” in SafeMotos is not there by chance. Africa’s roads are the most dangerous in the world, with traffic accidents causing more deaths than malaria in many countries. In Rwanda, 80% of accidents involve the 20,000 “mototaxis” in the capital, Kigali. Moto accidents are the second leading cause of death in Rwanda after HIV/Aids.

To address this issue, in 2010 business partners Peter Kariuki and Barrett Nash came up with an app through which users could order taxis piloted by experienced drivers who have been screened and are then monitored for safe driving using data collected by telemetric sensors in their smartphones. More than 400,000 journeys have been arranged through SafeMotos in Kigali; the service is now launching in Kinshasa, Africa’s third largest city. SafeMotos was on the Royal Academy of Engineering’s 2018 shortlist for the Africa Prize for Engineering Innovation.

An Angolan app, Tupuca began as a food delivery service, but it has now expanded beyond restaurants to include supermarkets and pharmacies. Founded in 2015 by four young Angolans, including CEO Erickson Mvezi, the company is now thriving. The app is reported to have more than 20,000 active users, an impressive figure for a market without a tradition of ordering delivery food and groceries. 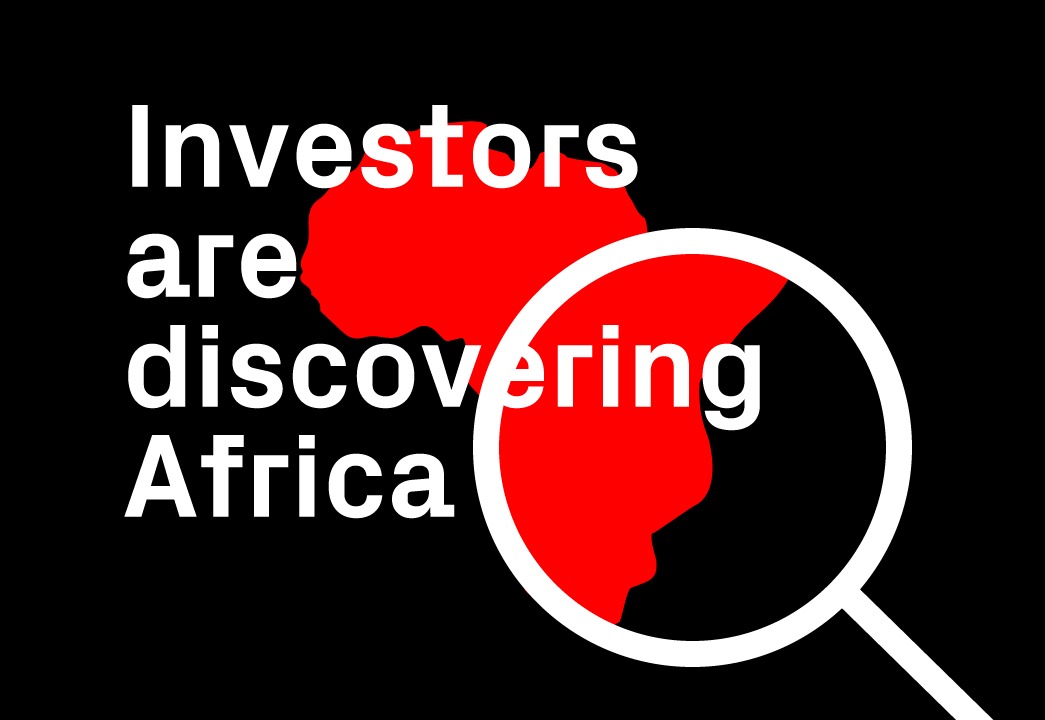 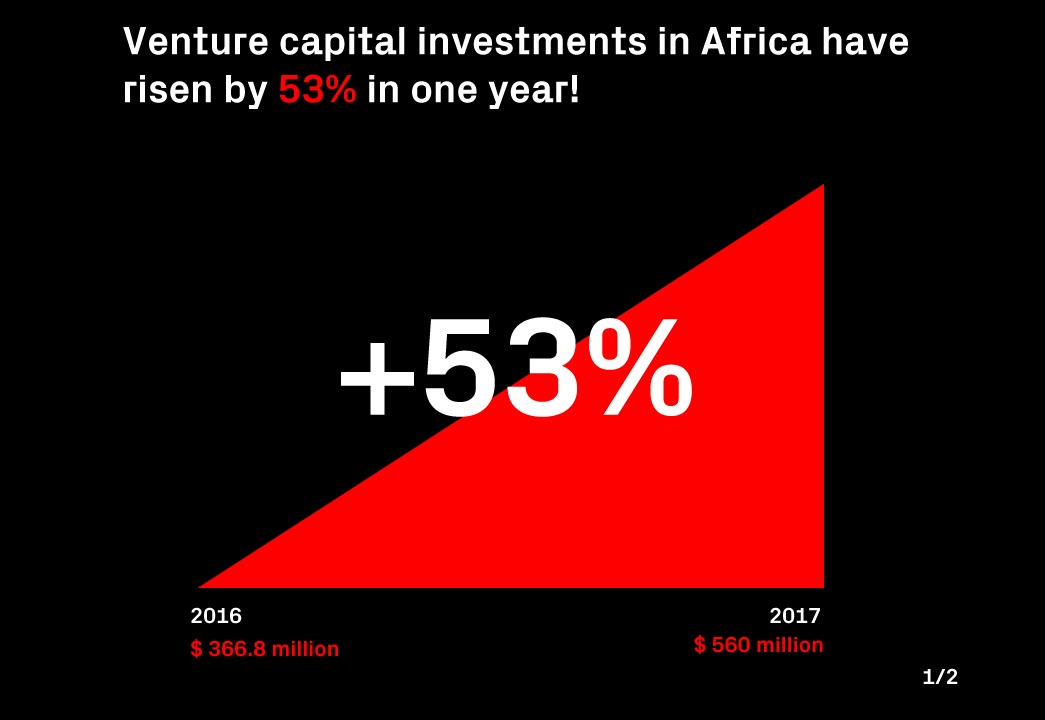 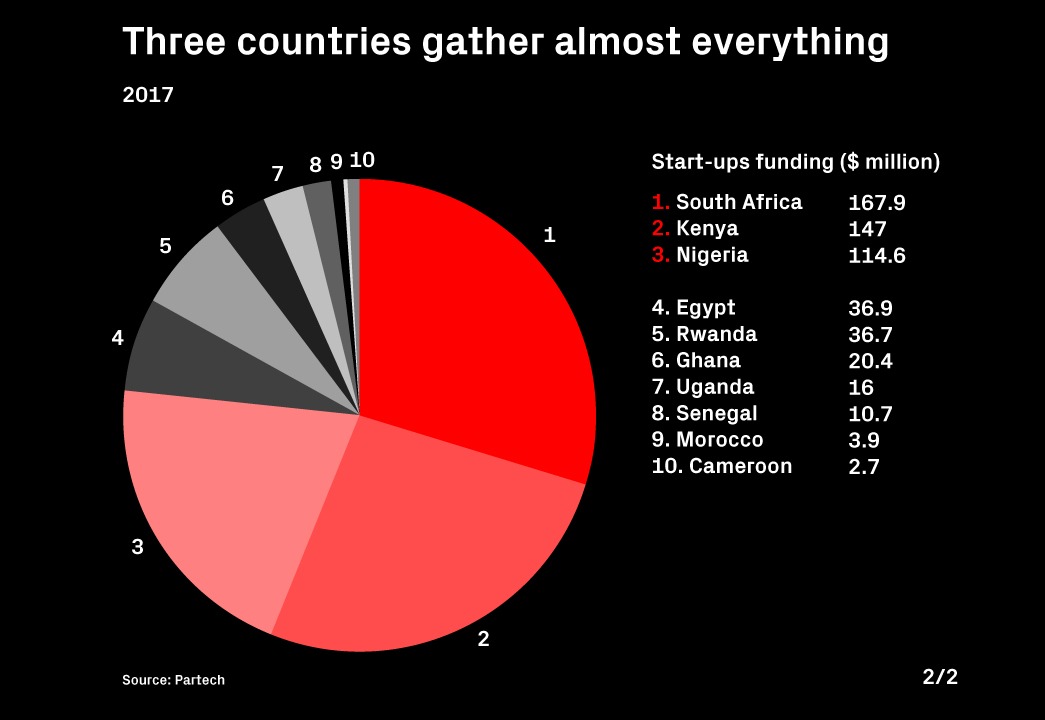 South African startup Sun Exchange is founded on a simple and effective idea. First, they and their partners identify suitable places for small-scale solar installations, notably locations that receive a lot of sun but would benefit from a cheap and regular power supply. This might be a small village. Then microinvestors are invited to buy a stake, and the necessary funds are raised. When the installation is completed, the villagers get affordable power and the investors get a steady return.

Given that sunshine is one of Africa’s natural resources, while regular electricity supply is not, it’s a great match. , Sun Exchange has attracted more than 14,000 members in 90 countries. Its potential was recognised this year when Alphabit, a US hedge fund, made a $500,000 seed investment. Through its micro-leasing platform it has organised funding for six operational solar projects in South Africa, benefitting schools, wildlife protection parks and small businesses.

Future expansions include a partnership with the United Nations Development Program to work on blockchain-based finance for solar power in Moldova and a partnership with Powerhive, backed by actor Leonardo DiCaprio, that aims to use the Sun Exchange platform to bring electricity to as many as 175,000 people in Kenya who currently have none.

7. Flutterwave: a foundation for development

Flutterwave was founded in Nigeria in 2016, based on a financial application programming interface that makes it simpler to process payments across Africa. It is not just a useful tool for individuals, but also an enabling technology because it helps other businesses, including start-ups.

And while Flutterwave is useful within countries, the unique nature of Africa makes it doubly useful across borders. Unlike Europe and the US, where card payments are accepted with little differentiation between states, in Africa each country has its own way of accepting payments, complicating international transactions and making it difficult for Africans to pay to access online services from global giants such as Amazon and Google. Flutterwave transcends this, being compatible with the 90-plus payment methods used by some 30 African countries, as well as standard international methods.

Over the past two years Flutterwave has processed more than $2 billion in payments through 39 million online transactions. It is helping Africa be part of the digital economy. Indeed, one of its clients is Uber.

What if you could reduce CO2 emissions massively while providing a more affordable power supply to hundreds of thousands of people? This is what M-Kopa has done. As of January 2018, this Kenyan start-up, launched in 2012, had connected more than 600,000 homes in East Africa to solar power sources.

M-Kopa estimates that it saves its customers around $750 in the first four years of use – an immense benefit for the 80% of its users who live on less than $2 a day. In addition, they no longer have to use dirty kerosene fuel. As of January 2018, M-Kopa had saved customers $450 million, while providing 75 million hours of “fume-free light” per month, with a reduction in CO2 emissions of 780,000 tonnes. By any standard, this is an impact.

Electronic waste around the world grew to 44.7 million tonnes in 2016. 60-90% of this waste is being illegally traded and sent to Asia and Western Africa. Just dealing with this presents a real challenge, but imagine if you could turn it into something useful and valuable.

A young inventor in Togo, Kodjo Afate Gnikou, did exactly that in 2013, creating a cheap 3D printer using electronic waste. Working from Woelab, a community for innovation and a “space for democratic technology” in Togo’s capital city, Lomé, he symbolises the bottom-up development that is occurring alongside more conventional approaches.

In 2013 a new tech start-up began to change the way properties are rented and sold in Ghana. MeQasa is an online platform that connects prospective buyers and tenants, landlords, real estate agents and brokers to make the whole process quick and easy.

Two years later, MeQasa secured a $500,000 investment from Frontier Digital Ventures, based in Kuala Lumpur, Malaysia. In 2018 MeQasa announced the launch of two new mobile apps, together with a rebrand. 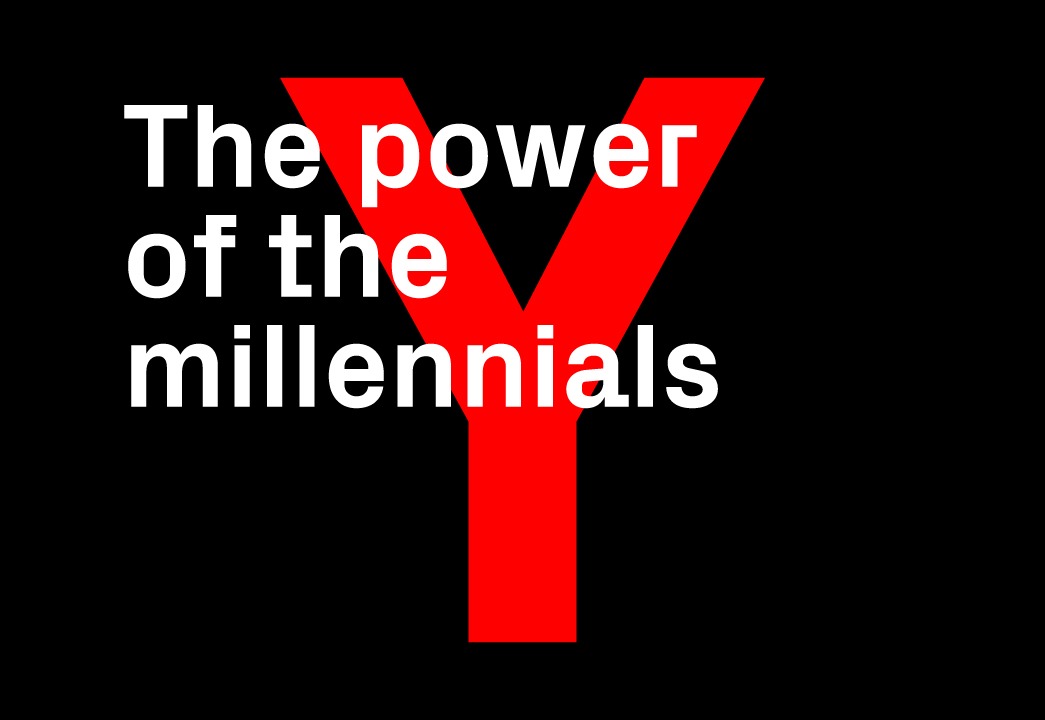 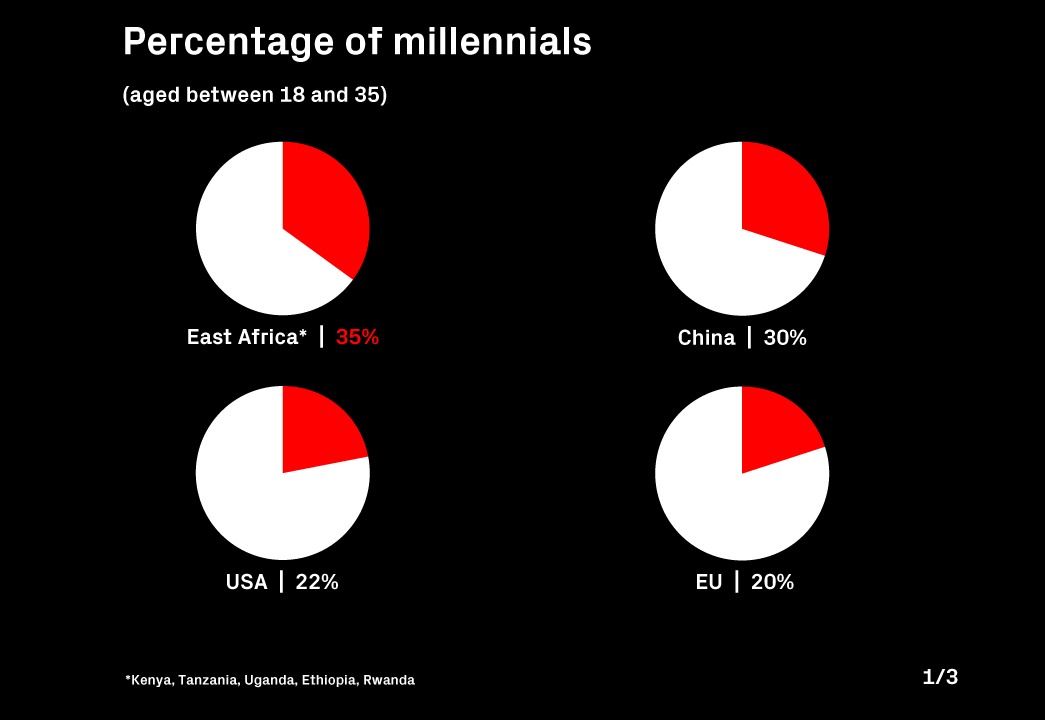 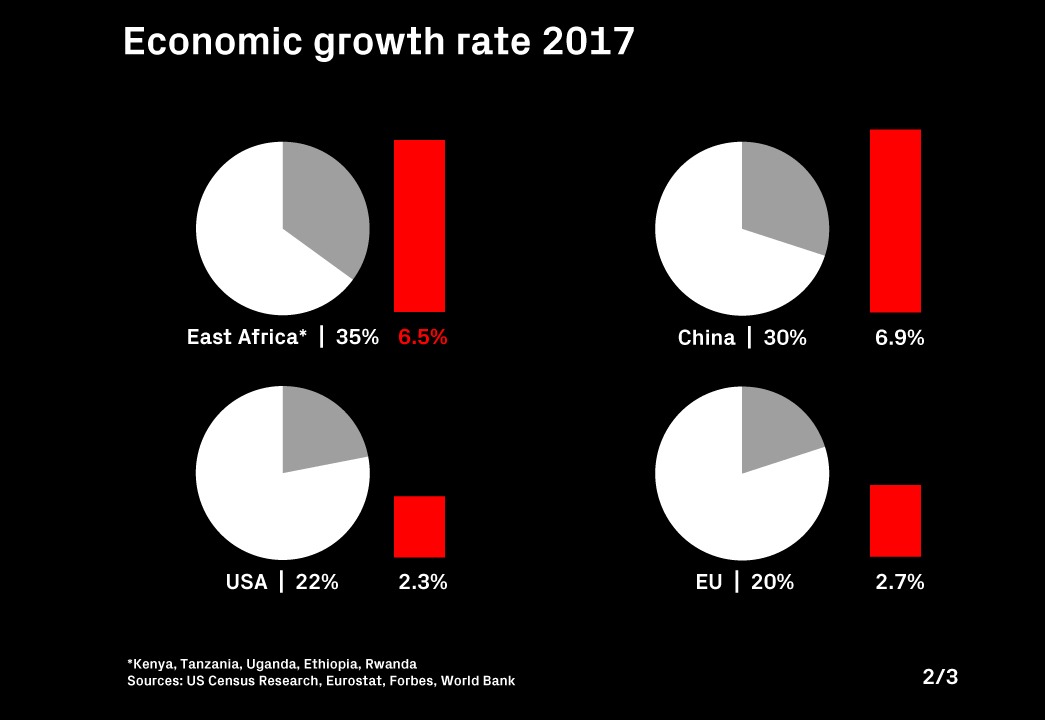 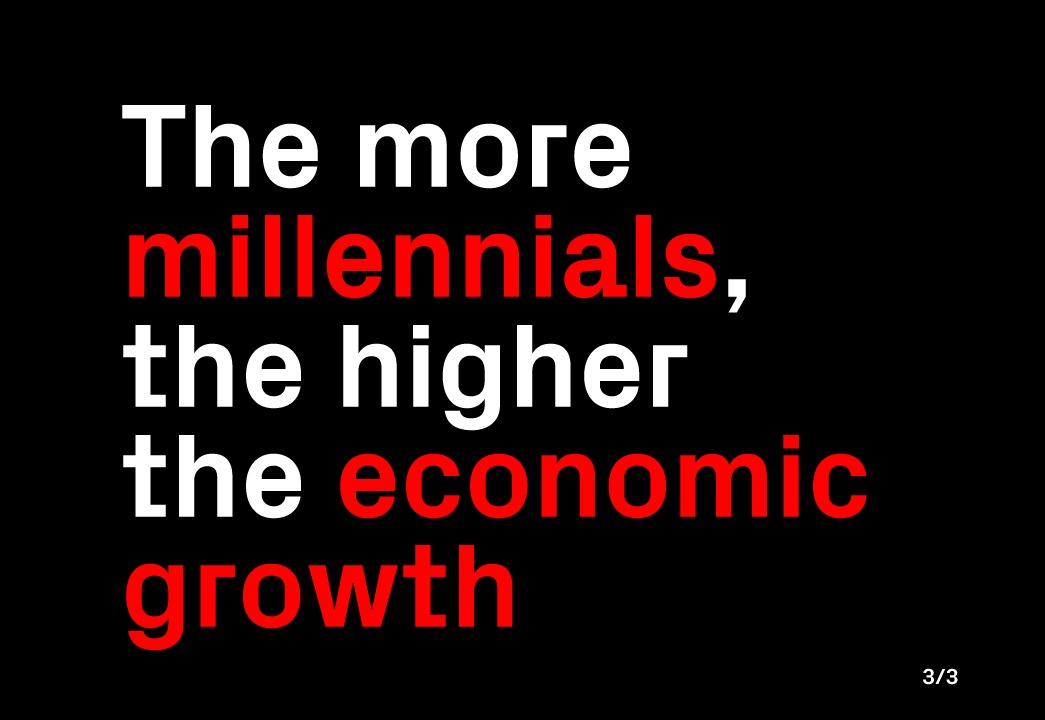 Recycling and refurbishment are still rare in Europe’s economies. Platforms like Refurbed offer a first contact to a more sustainable approach.

In the face of large-scale industrial water pollution, technologists are demonstrating the surprising value of wastewater.